Glen Retief is an Associate Professor of nonfiction writing at Susquehanna University. His The Jack Bank: A Memoir of a South African Childhood won a Lambda Literary Award. 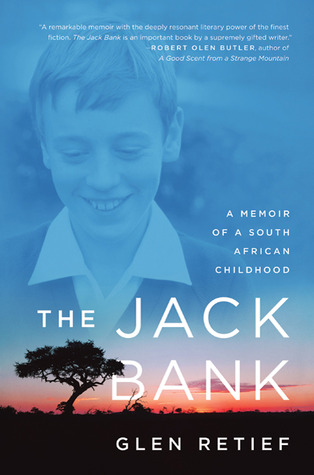 An extraordinary, literary memoir of a gay white South African, coming of age—and realizing he’s attracted to black men—at the end of apartheid, during the 1980s and early 90s.

Glen Retief’s childhood was at once recognizably ordinary—camping with his brother and sister, playing soldiers with the kid next door—and brutally unusual.  Raised in the middle of a game preserve where his father worked, Retief experienced his warm nuclear family as a preserve of its own, protection against chaotic forces working just outside its borders: a childhood contact who taught Retief how to use police lingo on walkie-talkies was also the leader of a death squad, killed human rights activists, and dumped their bodies in crocodile-infested rivers.

But it was only at twelve, when Retief was sent to boarding school, that he was truly exposed to human cruelty and frailty.  When the seventeen-year-old prefects who ruled the dormitories were caught torturing the younger boys, they didn’t stop the hazing. Instead, they invented “the jack bank”, where underclassman could save beatings safely dispensed when nobody was looking, earn interest on their deposits, and draw on them later to atone for their supposed infractions.  Retief writes movingly of the complicated stew of emotions and politics that informed this punitive all-male world, and of how he navigated its shoals, sometimes identifying with his torturers himself even as he began to realize that his adult life and sexuality would be very different than theirs.  The book ends with the exhilarating freedom of democracy and self-acceptance.

Read an excerpt of The Jack Bank.

“Glen Retief’s remarkable book, The Jack Bank, is a memoir with the deeply resonant literary power of the finest fiction.  Retief explores his formative years as a South African white boy discovering his gayness and the hard truths of apartheid, and he does so with the sensual particularity and the scene-based drama and the pitch-perfect narrative voice of a brilliant novel.  He profoundly addresses the great theme of literature: who am I and where do I belong?  The Jack Bank is an important book by a supremely gifted writer.”

“Glen Retief’s Jack Bank is a transgressive, harrowing and illuminating work of literary art.  In a language marked by a brutal childhood in the last years of the apartheid regime, and with uncommon wisdom, Retief’s epiphanic narrative draws us into regions of  cultural importance beyond the scope of traditional memoir.  Thus, he changes what we imagine this genre to be, allowing it to become something truer.”

—Carolyn Forché, author of What You Have Heard Is True

“The Jack Bank is one of those books that you never forget and never stop talking about. I can’t recall another coming-of-age story quite like it, with Kruger National Park providing the backdrop for such an original and provocative memoir. Glen Retief is a writer of rare grace and bracing courage, and he belongs in the pantheon of the white Africans–Rian Malan, Alexandra Fuller, Lynn Freed, Peter Godwin, Coetzee, Gordimer, et al–whose writings have been absolutely essential to our intimate understanding of what happened in the hearts and minds and indeed, in this case, the libidos of all Africans when the colonies came crashing down.”

“Eloquent…readers everywhere will be caught by the searing detail about family, friendship, sex and love.” –Booklist

“Probing deeply into his personal memories of race, sexuality, and violence, creative writing instructor Retief has written a potent, evocative chronicle of his youth.” –Publishers Weekly